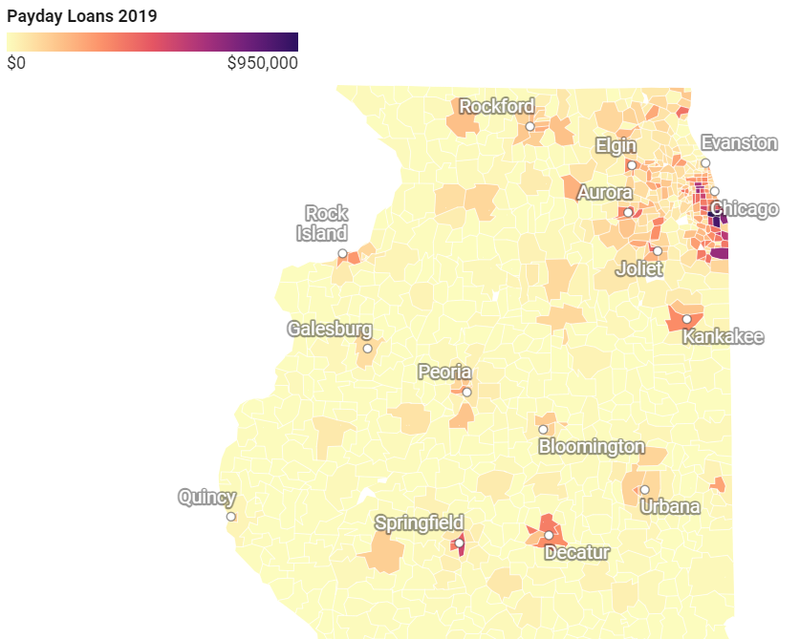 Getting Rich Off Cash-Strapped Illinoisans: Payday Loans by Zip Code

Payday loans have stripped millions out of Black and Brown communities

Until passage of a new law this year, millions of dollars were stripped each year from low and middle-income communities across Illinois. No where was this more true than in Black and Brown neighborhoods struggling to build family and community wealth after years of underpay and disinvestment from government and the business community. Known as predatory loans, payday lenders, auto title lenders, and other short-term lenders charged interest rates as high as 400 percent since they became legal in the 1980’s.

Analysis from Woodstock Institute and New America shows just how concentrated these shady loans were as recently as 2019. Several zip codes in primarily Black and Latinx areas of Chicago borrowed incredibly high amounts of loans from payday lenders. For example, zip codes 60620, 60628, and 60619 which all are 93 percent or more Black each accounted for between $820,000 and $940,000 in payday loans in 2019 alone. Other areas of the state with higher Black and Brown populations including Rock Island, Decatur, Springfield, Belleville, East St. Louis, Rockford, Kankakee, and Elgin also had higher amounts of payday loan debt. With such high interest rates, these predatory loans had an incredibly high cost for communities, taking money that otherwise might have been saved or invested in assets to build wealth in these communities.

Meegan Dugan Adell
Fellow, New America Chicago Meegan Dugan Adell is a fellow who leads the Chicago portfolio in New America Local, in collaboration with the Chicago Community Trust. Her work focuses on how local communities and public policy work to improve equity and economic mobility. Her research interests include the future of work, economic equity, public interest technology, and the burgeoning role of technology in democratic engagement. Prior to joining New America, she worked as a consultant, specializing in ideation, policy advocacy, and strategy to help foundations and nonprofits improve their impact on economic equity. Recent work includes leading the Chicago Citywide Literacy Coalition through a user experience research and career pathways planning project and a paper on increasing bachelors’ degree attainment among blacks and Latinos in Illinois. Previously, she worked as senior policy manager at Women Employed, developing and advocating for policy solutions to improve low-income women’s access to higher education. In that role, she led a successful effort to increase Illinois need-based aid by $35 million and integrate new policies supporting returning adults’ higher education completion. A former McCormick-Tribune Urban Community Development Fellow at the University of Chicago, Adell also worked with Dr. Mark Joseph on a ground-breaking study of new mixed-income housing developments in Chicago. Prior to graduate school, she worked in community organizing and workforce development in the city of Chicago including welfare-to-work projects with ex-offenders at Bethel New Life and The Safer Foundation. She holds a B.A. in sociology and Spanish from North Park University and an A.M. from the University of Chicago.
Next
Map of Nonprofit Financial Counseling and Services in Chicago